Cocoa intercropping appears simple and easy because of the term “intercrop”. However, there are many factors to consider before choosing or when choosing a crop to intercrop in cocoa plantations. Farmers intercrop to avoid total crop failure, increase income, and have varieties of farm produce.

In a cocoa plantation, it is important to intercrop certain crops with our cocoa to serves as a shade and fencing for cocoa seedlings and trees respectively. Crops that are intercrop with cocoa may be there on a temporary or permanent basis depending on its function. Crop planted temporarily provide shelter for the young cocoa plant while the crop planted permanently serves as windbreak or fencing to protect the plantation against strong wind.

A common example of a temporary shade plant is plantain. 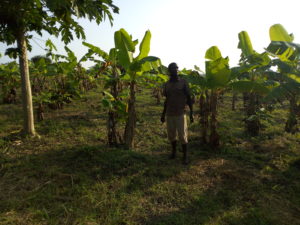 Another way to increase diversity, income, and reduce environmental degradation is through cocoa agroforestry. The latter is the intercrop of forest or economic trees with cocoa. Planting tree crops in a cocoa farm will greatly enrich the plantation as it will provide timber, fruits, and fuel. Should the price of cocoa fall, the income of smallholder farmers will still be a safeguard.

During the land preparation stage, medicinal, indigenous fruits, and timber trees should be retained (minimize deforestation and reduce the cost of raising temporary shade plants).

Planting food crops as a shade or nurse plants within and around the cocoa farms can protect young cocoa seedlings by serving as shade. Food crops such as cassava, maize, or plantain can be intercrop with cocoa between 3 to 5 years of establishing the field.

The major reason why farmers do not intercrop tree crops in their cocoa farms is because of the damage caused to the cocoa during the felling of the timbers.

Oil Palm Farming or Processing: Which one has the greatest value?

Harvesting and fermentation of cocoa

Procedure on how to establish your own palm oil tree plantation